By cathyvaneck / April 11, 2003 / on body, overview of all works, reproducing, theatre piece, Uncategorized

Actions of Memory (2003) a performance for guitar, trombone, double bass and live electronics

commissioned by the muziekwerkplaats de Trampoline

Writing my first pieces for instruments and live electronics during my composition studies in The Hague and Berlin, I was confronted with loudspeakers and musicians sharing the same stage.  Live electronics often create a very dynamic relationship between musician and electronic sound. In my view, the “rigid” loudspeakers were nothing more than passive reproduction devices.  The contrast between what I called, at that time, “alive” musicians and “dead” loudspeakers bothered me. The first project considering this matter is Actions of Memory. Three musicians wore loudspeakers on their backs and in this way were physically connected to the loudspeaker. Wherever they went in the performance space, the loudspeakers went with them. Different loudspeaker positions could be used by the musicians by taking different positions in the hall. Instead of having a loudspeaker system that consisted of four or eight identical loudspeakers, in this case, there was a hierarchy between the four loudspeakers placed in each corner of the hall and the three loudspeakers on the backs of the performers, which were old fashioned livingroom loudspeakers. Furthermore, there were many possibilities for communication between the musicians; for example, by emitting the sound of one player through the back-loudspeaker of another player. Evidently, during the course of this project, it turned out that identifying a musician with the sound coming out of the loudspeaker on his back was not always easy. Many of my assumptions at the start of this project were based on the idea that loudspeakers “reproduce” the sound of the musician and would, therefore, also automatically “reproduce” the musician his- or herself (see also my thoughts on reproduction in chapter 2 and 5 of my thesis). By reproducing the sounds, earlier produced by one musician, through the loudspeaker on the back of another musician, I assumed that they would be automatically “communicating” with each other. It turned out that these copies of the musicians did not come out through the loudspeakers. Since this was an art project that needed “a happy end” (there were public performances planned) I focused on many other compositional aspects that were possible with this set-up and the loudspeaker question was taken to the next project. 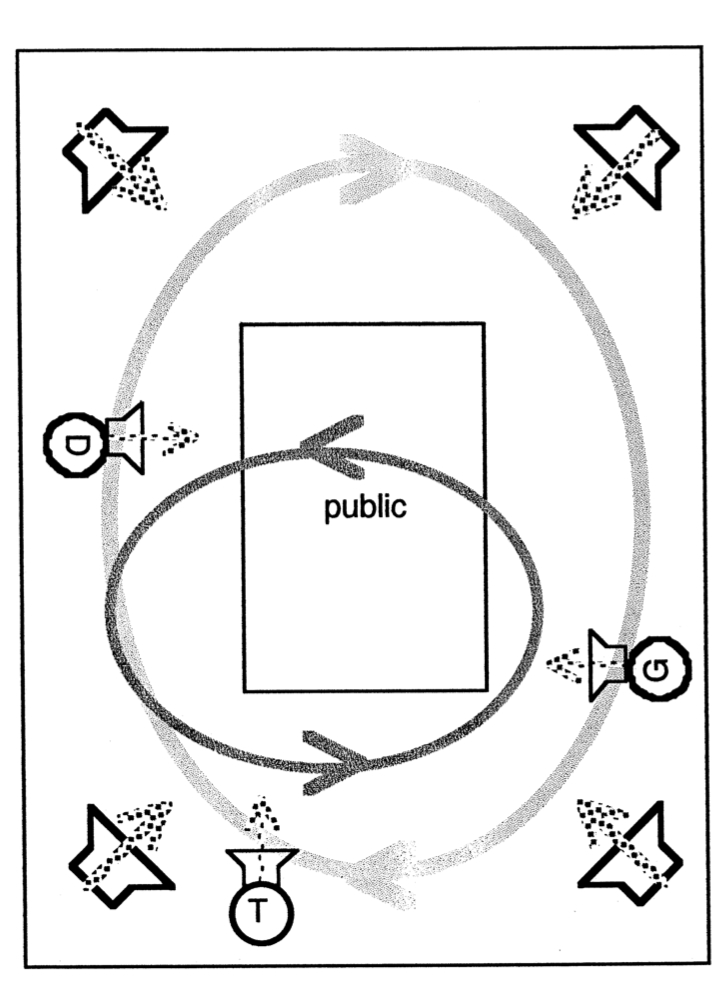 A scheme of the score of Actions of Memory, depicting the positions of the loudspeakers as well as the movemens of the sounds.