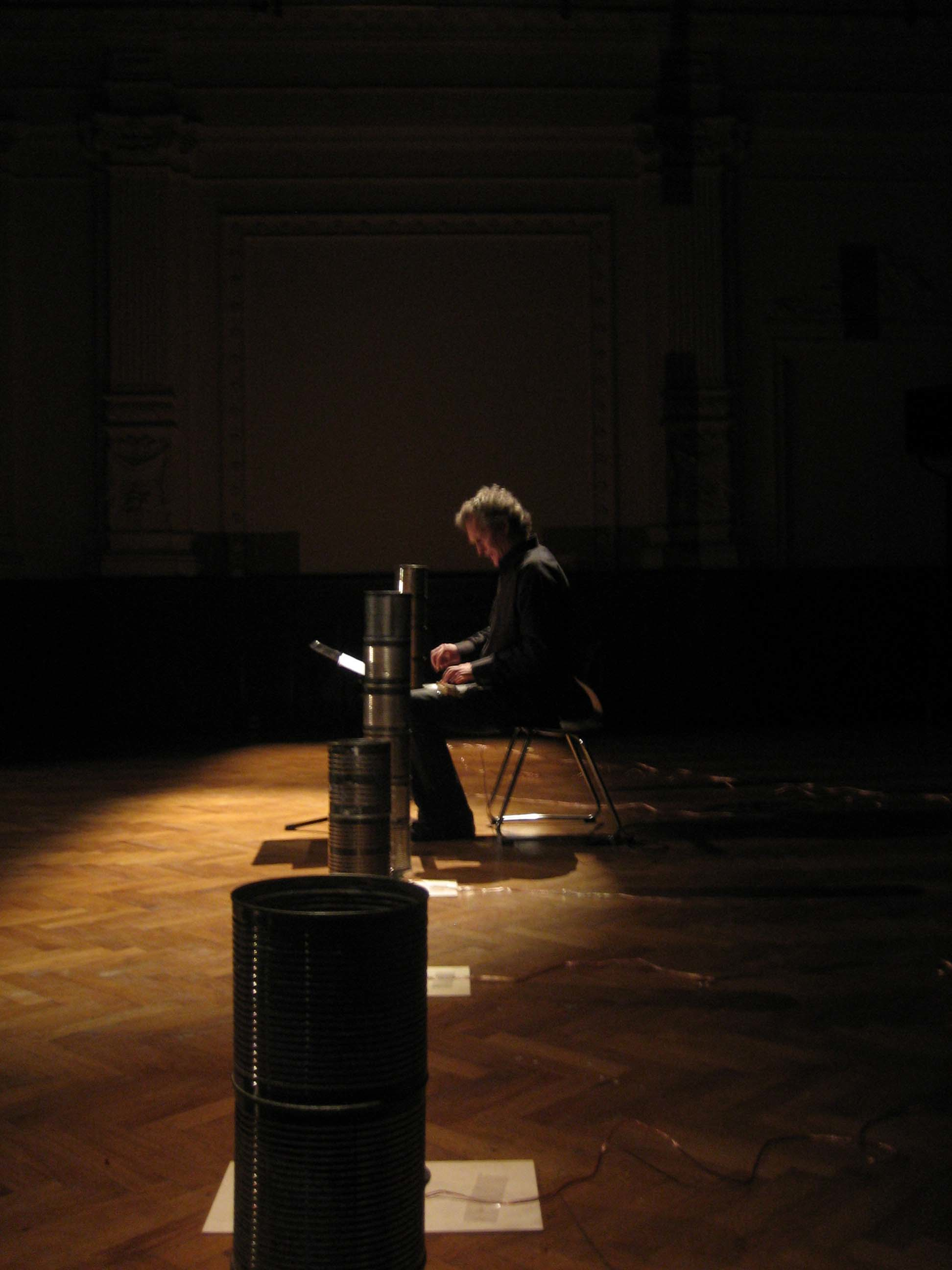 By putting the loudspeakers in a line next to the performer, they are both at the same perspective on stage.

This piece is the first in a series of experiments with tin cans and loudspeakers or body shakers. One of the aims of Blik na blik was to create a set-up, in which a musical instrument (in this case a small plucked string instrument, which I call a tin can guitar) would be supported by loudspeakers that were built by the same material as the instrument; in this case, tin cans. The resonating qualities of the instrument relate directly to the resonating qualities of the loudspeaker, a similar approach to the one used by Alvin Lucier in Music for piano with amplified sonorous vessels. The small tin can guitar is confronted with virtual guitars, generated by a computer (more information on the supporting and generating approach can be found in chapter 2 of my thesis).

For Blik na blik I built a small instrument from a tin can, quite similar to a small guitar, and picked up its vibrations with the help of a contact microphone (AKG C411). Seven loudspeakers in a row are used for the sound diffusion, as can be seen on the picture. All of these loudspeakers were prepared with different amounts of tin cans, causing them to filter the sound emitted by these loudspeakers, each in a different way. By putting the loudspeakers in a line next to the performer, they are both at the same perspective on stage. The guitarist could be seen and heard in the same row as the tin can towers. Besides the sound of the amplified guitar, I used synthesised guitar sounds, mainly developed live with the mandolin~ object of the PeRColate library for MaxMSP software by Dan Trueman and R. Luke DuBois (see www.music.columbia.edu/PeRColate/). With the help of this so-called physical model of a mandolin I could create many different sounds similar to the ones made by plucked string instruments. These sounds were often triggered by the guitar, but also played independently by the live electronics performer (me, in this case).

The relationship between the small tin can guitar player and the sound emitted through the tin cans was an important compositional element. At the beginning, the guitar plays just one tone, and triggers a sound made by the physical model of a mandolin. The single “ploing” goes from one loudspeaker to another:

The musician plays the tin can guitar through the loudspeakers and, as can be heard in the following fragment, a change from one loudspeaker to another is automatically a change in sound colour and position in space:

The tin can loudspeakers now start to “store” the sound of the guitar in their cans, by electronic processing (I use a very long reverb on the guitar sound):

During the piece, the tin can loudspeakers become more and more autonomous, resulting in a solo without any triggering by the tin can guitar. This is played solo by the live electronics performer. Although this could have been done with a fixed sound file as well, I preferred to perform this. It was easier to adapt my performance to the resonances of the tin can towers in this way:

This solo of the tin can loudspeakers ends in all of them playing in a very “virtuoso” manner:

When I developed this piece, I was merely interested in confronting several forms of plucked string sounds with one another. When reflecting on this piece in a later stage of my research, I realised that the supporting (amplification of the guitar), generating (synthesised guitar-like sounds) and interacting (the tin cans alter the sounds emitted by the loudspeaker) approach are, in fact, all present here.