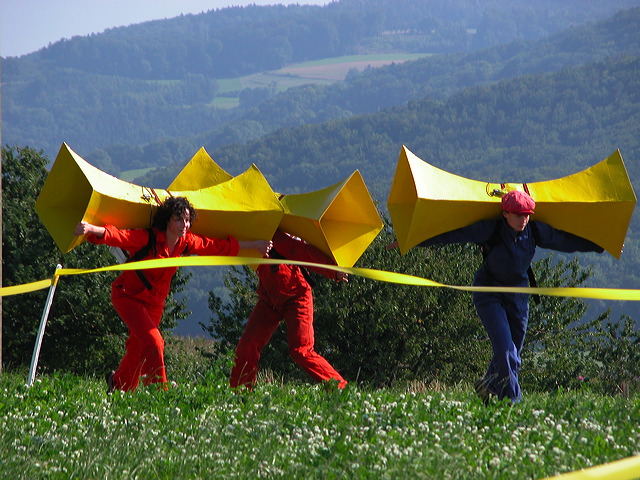 A rehearsal of Oefening in stilzwijgend zingen: the three dancers are wearing the portable loudspeaker horns.

This was the first Hearing Sirens piece I created. Similar to the idea in Actions of Memory, I wanted to attach the sound source to the body of the performer. This time, not to create a more dynamic relationship between musician and loudspeaker, but to experiment with sound sources that move along with the performer. To give the loudspeakers a more of a directional quality, similar to what was the case in Actions of Memory, I attached a big cardboard horn to them. Together with Teresa Rotemberg, an experienced choreographer, I developed the choreography for this piece. The performance took place outside, in the hills in Switzerland. For the festival, a village of shipping containers was built, each artist presenting his work in such a shipping container. My dancers moved during this piece from the hilly landscape towards the shipping containers, ending their performance on top of these shipping containers. 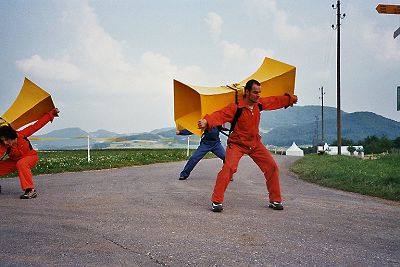 The performance started in the hilly landscape… 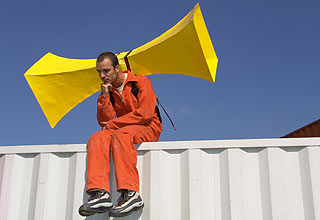 …and ended on top of the shipping containers.

The sound emitted by the loudspeakers has been synthesised with the use of pulses and filters, using the software MaxMSP. Since the horns were not yet finished, and I did not realise how much they would change the sound result, I designed most of the sounds whilst listening to them through monitor loudspeakers in the studio. In later pieces for the loudspeaker horns I always used the horns themselves for designing my sounds. The aim was to create a sound that resembles emergency sirens, but can be flexibly changed to other sounds, such as clicks and noises, that are less related to a typical siren sound. The sounds often moved from one loudspeaker to the other. The piece is originally for six channels, since it has been composed for three dancers, each with two loudspeaker horns. This is a short fragment of the piece, before it is diffused through a cardboard horn, and thus contains only sounds as generated by the computer software (two channels, to the left and right of all six channels, are maintained). To obtain the effect of the performance, you should attach horns to your loudspeakers at home, but a small impression can already be obtained by turning both loudspeakers in different directions:

As can be seen in the short video* below, the choreography focused on the dancers’ movements that mainly made the movements of the sound source audible. It is thus focusing on the movement parameter as I described in Hearing Sirens. When the dancers “fall”, their loudspeaker horns are turned towards the audience. This becomes even clearer with the turns at the end of the movie: the sound source moves at the same speed as the dancers.

In the open air, there are nearly no reflections of the sound waves, since there is nothing that can reflect them. As soon as the dancers entered the shipping container village though, the metal walls of the shipping container reflected the sound. It was in this way, that I discovered that these horns may cause spatial effects, as I discussed in Hearing Sirens. I experimented with the horns by rehearsing and performing the same piece in a conventional concert hall. This performance lead to the conclusion that indeed a completely different effect is obtained as soon as the first reflections of the sound are heard instead of the direct sound waves, as emitted by the horns. What kinds of changes this caused in the performance can be read at Hearing Sirens (2007) (for one performer). 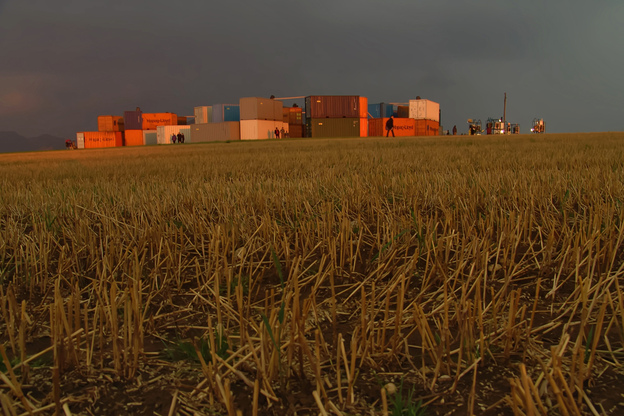 The shipping container village reflected the sounds emitted by the loudspeaker horns, contrary to the hilly landscape.

* Unfortunately there is no good documentation of this performance. This movie is an excerpt of a rehearsal and the audio and image quality is low; people are talking and much noise is produced by the video camera. Nonetheless, it makes the acoustic effect of the horns audible.