By cathyvaneck / August 23, 2005 / generating, horns, movement, on body, overview of all works, space 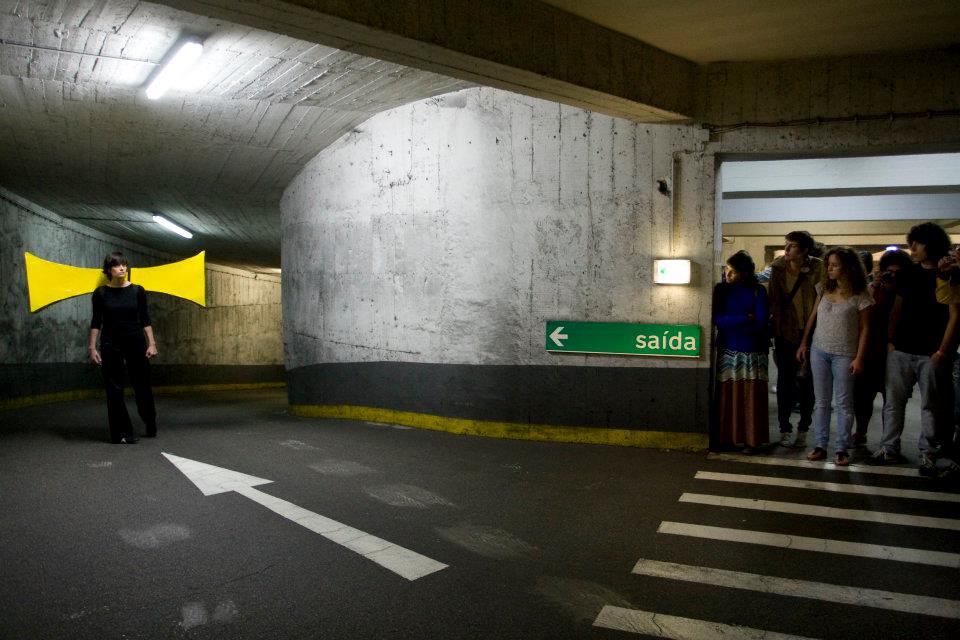 After Actions of Memory, this was my second attempt to perform with loudspeakers attached to the bodies of the performers. This project has accompanied me through nearly my whole research period and I have made several pieces for these portable loudspeaker horns. The first version of Hearing Sirens was a piece for three dancers, called Oefening in stilzwijgend zingen (2005). After this initial composition, several others followed, which I discuss in Hearing Sirens (2007) (for one performer).

The most important insight I gained by creating Hearing Sirens is the correlation between the interacting parameters movement and space (see chapter 4 of my thesis for an in-depth discussion of these parameters). Originally, this project was thought of as focusing on “movement of sound sources,” as its most important compositional parameter is considering the use of loudspeakers. The movement of the sound sources is always parallel with the movements of the person wearing the loudspeaker horns. These kinds of sound source movement, as used in Oefening in stilzwijgend zingen, could not be achieeived using conventional musical instruments.

What was a real discovery for me was the interaction happening between sound emitted by the horns and the performance environment. As I will explain in detail below, the emission of sound through the horn loudspeakers creates a spatial discovery of the performance environment, much more elaborate than the spatial interaction normally happening between instruments and environment. This was an effect I had not thought of when conceiving these loudspeakers. Contrary to what was the case when composing for the movement parameter, when composing for the space parameter, the movement of sound sources is never parallel to the movements of the person wearing the loudspeaker horns. A small movement of the performer will cause a big change in how the sound waves are reflected by the environment. The position of the sound source seems not to be the loudspeakers attached to the body of the performer, but the reflections of this sound source by the environment. This effect cannot be obtained by conventional musical instruments, since they do not emit their sound with such strong directional qualities.

The interacting parameter “space” became important now as well and very much influenced how I conceptualised later compositions for this set-up (see Hearing Sirens (2007) for one performer). This project made me much more aware of the difference between movement and space as well as the potential of combining both. As I clarify under the other pieces using loudspeakers in combination with horns, I started to consciously compose for these two parameters, creating specific sounds for each parameter as well as performing accordingly to make the specific interaction (movement or space) audible.

In my theory-focused work, I was confronted with similar problems. Whereas in my compositions, the differentiation between the categories are an aid to composition, by analysing pieces by other composers with the use of these parameters I was able to discover their compositional strategies. I have often been in doubt as to whether  movement and space should not be one parameter, since movement is a change of the position in space. Is the audience, by throwing the Sound Ball by Annea Lockwood, not discovering the space in a similar way as Kirsten Reese is doing in Der tönende See? As I discovered in Hearing Sirens there is a difference in perception of a moving sound source or the interaction between a sound and its environment. Technically speaking the same process is going on in the pieces of Reese and Lockwood. The bowls in Der tönende See only have to speed up and they would indeed be very similar to the Sound Ball. But it is exactly their slow movement that gives the observer time to hear their position in space in comparison to other sound sources, instead of focussing on how their position changes in space (which is the case for the Sound Ball).  .

The pieces Klangverordnung and Extended Ears are continuations of Hearing Sirens by elaborating upon some of the ideas in this project.

Construction and acoustical effect of the loudspeaker horns.

To get a general idea on the loudspeaker horns, I will give details on their construction here. I built so-called portable loudspeaker horns, consisting of a small mp3-player, a box with an amplifier and battery, and two loudspeakers in two big, yellow horns. The construction is made to be worn on the back of a dancer or performer. During the performance, an mp3 file with a composition of mine is played. The pieces are performed by the performer(s) walking, dancing or moving in different ways . 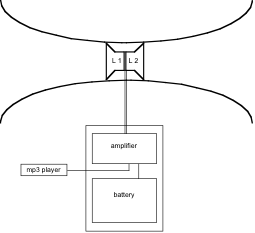 Portable loudspeaker-horns, consisting of a small mp3-player, a box with an amplifier and battery, and two loudspeakers in two big, yellow horns.

Horns used to be used for optimising the transmission of sound waves from membrane to air before electricity was used as amplification, as I discuss in chapter 1 of my thesis. As soon as electric amplification became available, horns were replaced by loudspeakers. In this project, I use what are normally regarded to be “disadvantages” of horns, such as colouring the sound and emitting sound in just one direction. Due to their specific form, the horn-loudspeakers guide the sound waves strongly in a bundle instead of a broader radiation pattern. The sound is diffused to the right and to the left, contrary to what is the case in a stereophonic loudspeaker system in the living room, which projects phantom images of the sound. By using these horns, often the first reflections are heard by the audience instead of the direct sound, as the scheme depicts. Depending on its form and material, each environment will reflect the sound in a characteristic way. Over the years, many performances were carried out in different environments, such as hills, woods, snow landscapes, city centres, a covered bridge, a conventional concert hall or a parking garage. 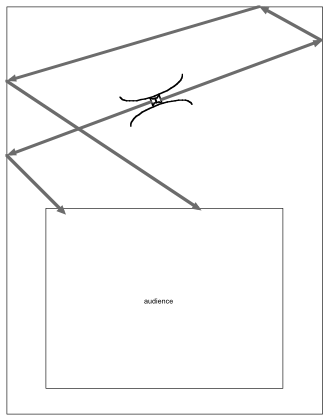 The sound waves (this reproduction of the acoustical signals is, of course, very simplified compared to what happens in reality). 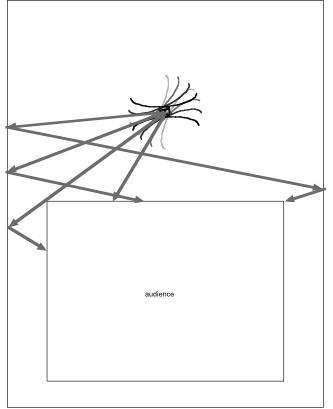 A small movement by the performer changes the position of the reflection, and the indirect sound source (perceived as the sound source by the audience) makes a big movement (again a simplified presentation).

Less important for my research on microphones and loudspeakers, the form and colour of the horns is based on two of the applications of the word “siren”. The siren is both a mythological woman, having the body of a bird and the head of a woman, and a noise-maker, used to warn in emergency cases. The sirens as bird-women were known in Antiquity for their beautiful singing. Men were unable to resist them and most of the men who heard them did not survive. The siren as a noisemaker is used to warn people that there is an emergency happening, and can therefore be seen as a survival tool. Sirens use a rotating disk with holes to create its characteristic sound. I used both of these concepts as an acoustic, visual, and conceptual starting-point for this project. 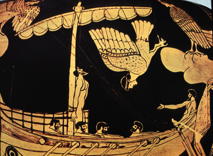 Attic red figure vase, depicting sirens (450 BC, the scenery is from The Odyssey). 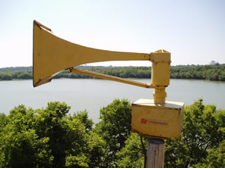 A siren as an outdoor warning noise maker.