By cathyvaneck / May 6, 2007 / horns, movement, overview of all works, space, Uncategorized 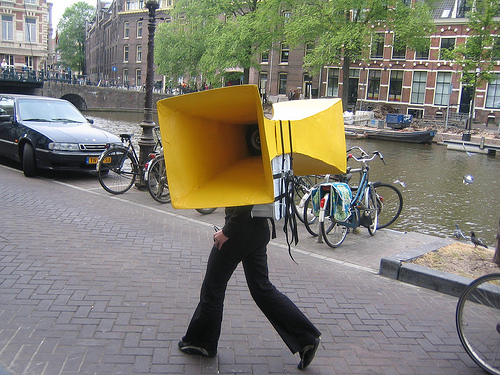 Performance of Hearing Sirens in Amsterdam (2007).

After my experiences with loudspeaker horns in Oefening in stilzwijgend zingen, I decided to develop a new composition for the horns. I developed this piece for only one performer and one pair of loudspeaker horns, so the interaction with the performance environment would be clearer. This composition was mainly composed whilst listening through the loudspeaker horns, resulting in sounds that are much rougher and harsher than in Oefening in stilzwijgend zingen, when listened to through monitor loudspeakers. The directional characteristics of sound waves can be identified by human beings, especially for short, high (especially around 3000 hertz), and noisy sounds. In the second composition for Hearing Sirens I added more energy to the upper partials of the sound spectrum (which is what causes the sound to be “rougher and harsher”) and worked with much shorter sounds. The composition uses, for example, high and noisy sounds (this will of course sound differently, when diffused through the loudspeaker horns):

I also used isolated clicks. Due to their shortness, their reflections can be well heard. The horns also colour them strongly:

This is how they sound during a performance:

During the second part of this movie, another compositional technique for discovering space is used. Since both loudspeaker horns emit their sounds in opposite directions, many possibilities for spatial interaction are created. An example is to rapidly alternate a sound between the loudspeakers. Both loudspeakers send their sound to a different part of the environment and, in this way, different spatial qualities will be heard.

As can be seen in the movie as well, the performers’ movements are totally different from those of the dancers in Oefening in stilzwijgend zingen. The movements of the dancers evoke associations, resulting in a story that is told. Their movements are placed upon the music. In Hearing Sirens (for one performer), the focus is not on the movement by the performer, but on the interaction between sounds emitted by the loudspeaker horns and the environment. For this reason, I decided to move not as if part of a choreography, but in a slow and “discovering” way. I search for what kind of interaction is happening between the sound emitted by the loudspeaker and the environment. As soon as I find a movement or a spot that I consider sonically interesting, I repeat the movement or stay at that spot. My way of performing this piece could be compared with Alvin Lucier’s Bird and Person Dyning. I prepare these performances by visiting the place and testing out the acoustical characteristics by hand clapping. Evidently, since this performance usually happens in public space, I cannot test the sound through the loudspeaker horns, since that would already be the performance, itself. In this way, I discover the spatial response of the environment and decide which sound will be played at which position as well as what kinds of movements would probably be suitable. 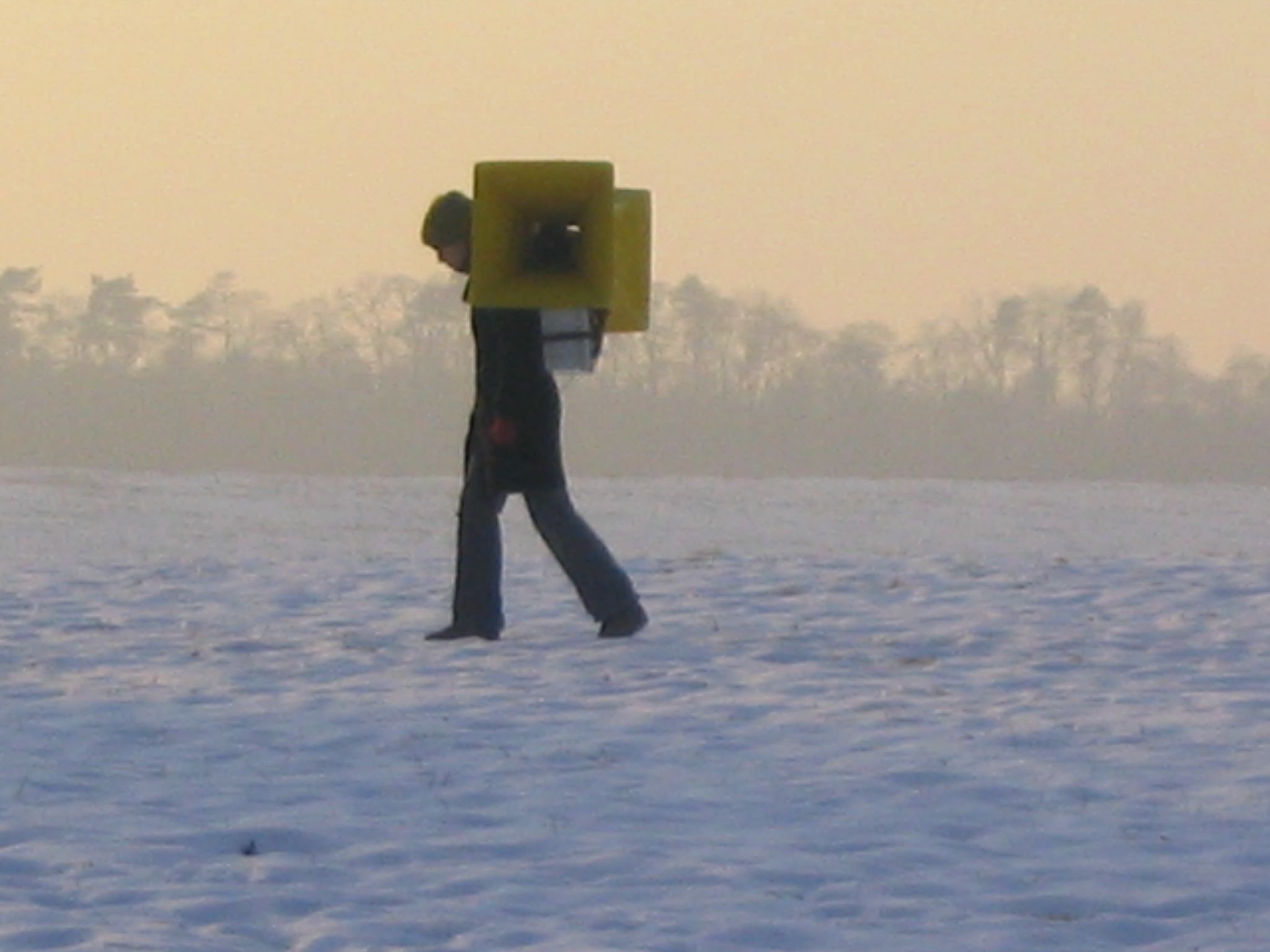 Performance of Hearing Sirens in the snow.