Geluid gemeten: no 23 & no 32 (2012) sound installation for several pieces of paper, two loudspeakers, a box and electronics
written for the Kolumba museum
commissioned by the biennale cologne 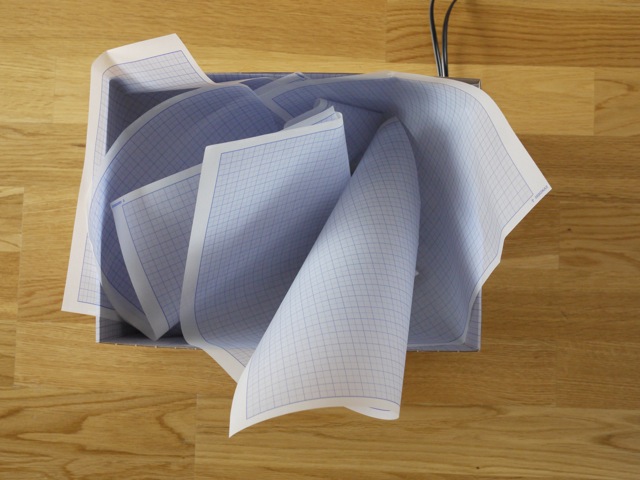 All sounds are transmitted through the paper and the loudspeakers themselves are completely hidden.

This is the sole installation I developed during my research project. It was two small loudspeakers in a small box, producing both audible vibrations as well as low frequencies, intended only to bring the paper, attached to their membranes, into movement. Thus, both the electronically generated sounds and the sounds made by the rustling of the paper are audible. All sounds are transmitted through the paper, which is glued on the loudspeaker membrane and the interaction is thus composed here with the help of the material parameter.  The box was part of an exhibition and concert in a museum in Cologne and should be placed in a seemingly unintentional way on a table, for example at the ticket booth. The papers also give the impression of just having been thrown into the box. The loudspeakers themselves are completely hidden: