A small loudspeaker is placed in an organ pipe.

My research started as an attempt to bring microphones and loudspeakers closer to conventional musical instruments during live electronic processes, as I explained in Actions of Memory. One of my main aims was to convert microphones and loudspeakers into musical instruments themselves. I call this the interacting approach and described many works using this approach in chapter 4 of my theoretical thesis.

During the last years I became less interested in working with conventional musical instruments, and got more interested in using solely microphones and loudspeakers. One of the last works composed for the combination of conventional musical instruments and loudspeakers is Im freien. In this piece I tried to “dress” the electronic sound in a similar way as the two other instruments, a recorder and a duduk. A small loudspeaker is therefore placed in an organ pipe. The pipe is, similar to the recorder and duduk, a “wind” instrument. 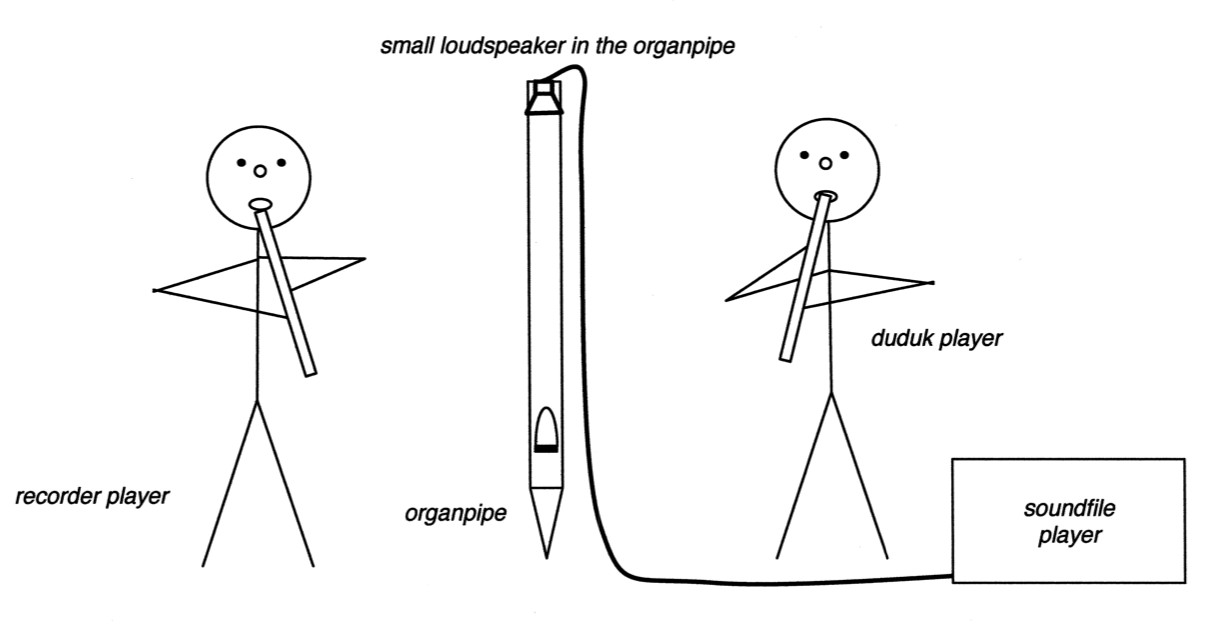 The set-up for Im freien.

During the piece fixed sound files are played through the loudspeaker and the instruments play their parts from a score. At the beginning of the piece, the electronic sound starts with a note, which is at the same pitch as the organ pipe itself. Although the sound is generated by electronic means, I want to create the illusion that the organ pipe itself is “playing” this sound.

All three are played with air, and for this reason I inserted a section in which the main sound material is breath. The recorder and duduk player are breathing and breath sounds are reproduced through the small loudspeaker:

Evidently, generating sounds that are associated with an other instrumental identity than the organ pipe itself, is a unique possibility of working with loudspeakers. Another association related to these wind instruments is brought up, when the sound of birds in a wood is emitted in the middle of this piece. Bird song is related to wind instruments in classical music, and, for example, flutes are frequently used for imitating birds. The loudspeaker emits a reproduction of these birds.

Till I composed Im freien my theoretical work was going to be finished after what is now chapter 4. I thought of the interaction approach as the ideal method to “play” microphones and loudspeakers as if they were musical instruments. I analysed many pieces to discover in what ways artists interacted with microphones and loudspeakers, and developed compositions in which I searched for my own practice to achieve this. During the compositional process of Im freien I was investigating not only in the sonic but as well in the sociologic context of organ pipes and wind instruments. Ideas such as bird song and breath seemed possible associations to me.  I realised that the what could be called a genuine aspect of microphones and loudspeakers as musical instruments was not to be able to create their own specific sound, as other instruments do, but their uniqueness was the ability to deal in many different ways with sound. They are able to reproduce other sound sources, to support other sound sources, to generate formerly unknown sound source and to interact with performers to create sounds of their own. The main achievement of this piece is therefore not necessarily its artistic value for me, but much more the alteration in my theoretical reflection it caused. I discovered, that the bird recordings, even when played back in poor quality (the loudspeaker is very small, and of course the organ pipe is clearly adding some resonances), in certain compositional contexts the reproducing approach can be easily recognised. After Im freien was finished, I started to look back at my own compositions and the pieces by other composers I analysed. I realised many­—if not all—are in fact based on a combination of approaches. The microphone and loudspeaker were not “not so good” conventional instruments but much more unique in the realm of sound producers (see chapter 5 for a more elaborate discussion of this idea).