Wings (2007 – 2008) for big white shields, three microphones, one loudspeaker and three performers.
Part of three performances about feedback by a search for renoise (strings by Sebastian Lach Lau and tubes by Paul Craenen)
with support from Champ d’Action and ORCiM

Wings was developed during a research project together with two other DocARTES doctoral candidates, Paul Craenen and Juan Sebastian Lach Lau. The research project focused on the possibilities of acoustic feedback combined with digital signal processing. Each performance explores a specific use of bodies, objects or instruments as sound resonators or mutes with which to manipulate the feedback-loops. A meta-musical environment comes into existence, in which sound textures, body postures, technical actions, and spatial positions interact and comment on one another. As a result, three new pieces were developed: Sebastián Lach Lau uses the computer to make an environment in which, besides the feedback happening between a microphone in the guitar and the loudspeakers, there is an improvisational feedback process happening between the guitar performer and the computer responses, which guides the development of the piece (this piece is titled Strings). I manipulate the feedback by shifting foam-board panels around, creating new spaces with every movement and therefore also changing the space in which the feedback can resonate. (Wings). Paul Craenen works with PVC pipes to build a new instrument, to trigger and manipulate feedback loops between loudspeakers and microphones, and to control the digital environment that processes the audio signals. (Tubes, see also more information in chapter 5). The performances are not only developed by Paul, Sebastián, and Cathy; they also appear on stage to execute them as well. 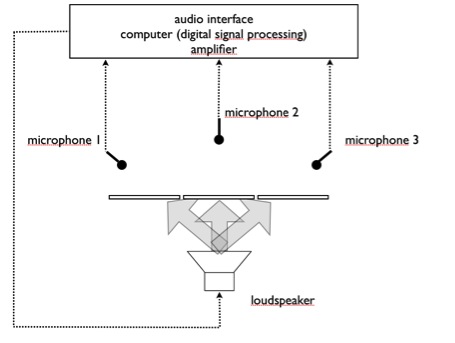 Set-up for Wings, with three microphones, a loudspeaker and foam-board panels.

The three performers manipulate the feedback by shifting these foam-board panels around, creating new spaces with every movement and therefore also changing the space, in which the feedback can resonate.  This piece is composed mainly by using the parameter space, as described in chapter 4. The distance between shield and loudspeaker as well as between shield and microphones changes the pitch of the feedback. The digital signal processing by the computer reacts to these feedback pitches and processes the sound in different ways, using simple techniques, such as pitch shifting and ring modulation.  The result is a choreography of movements with the white shields that designs the sound as well as the structure of the composition. These movements are notated in a score: 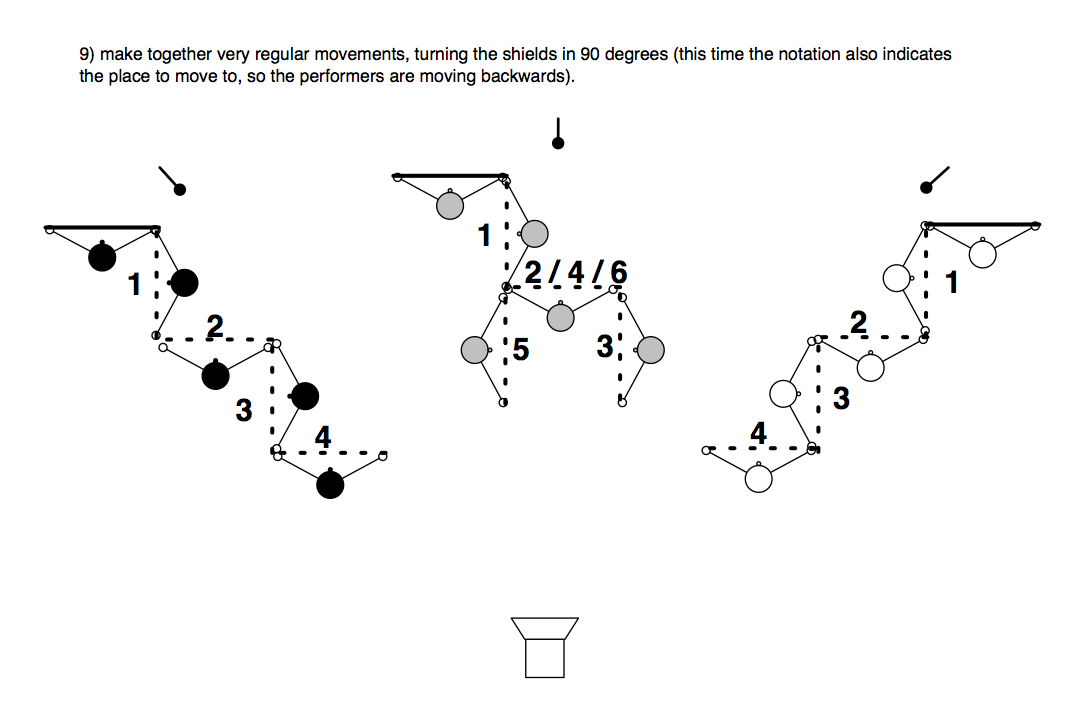 A page from the score of Wings. The numbers indicate the order of the movements.

The performers are often hidden behind the foam-board panels in Wings.
(picture ©SilvanaTorrinha)